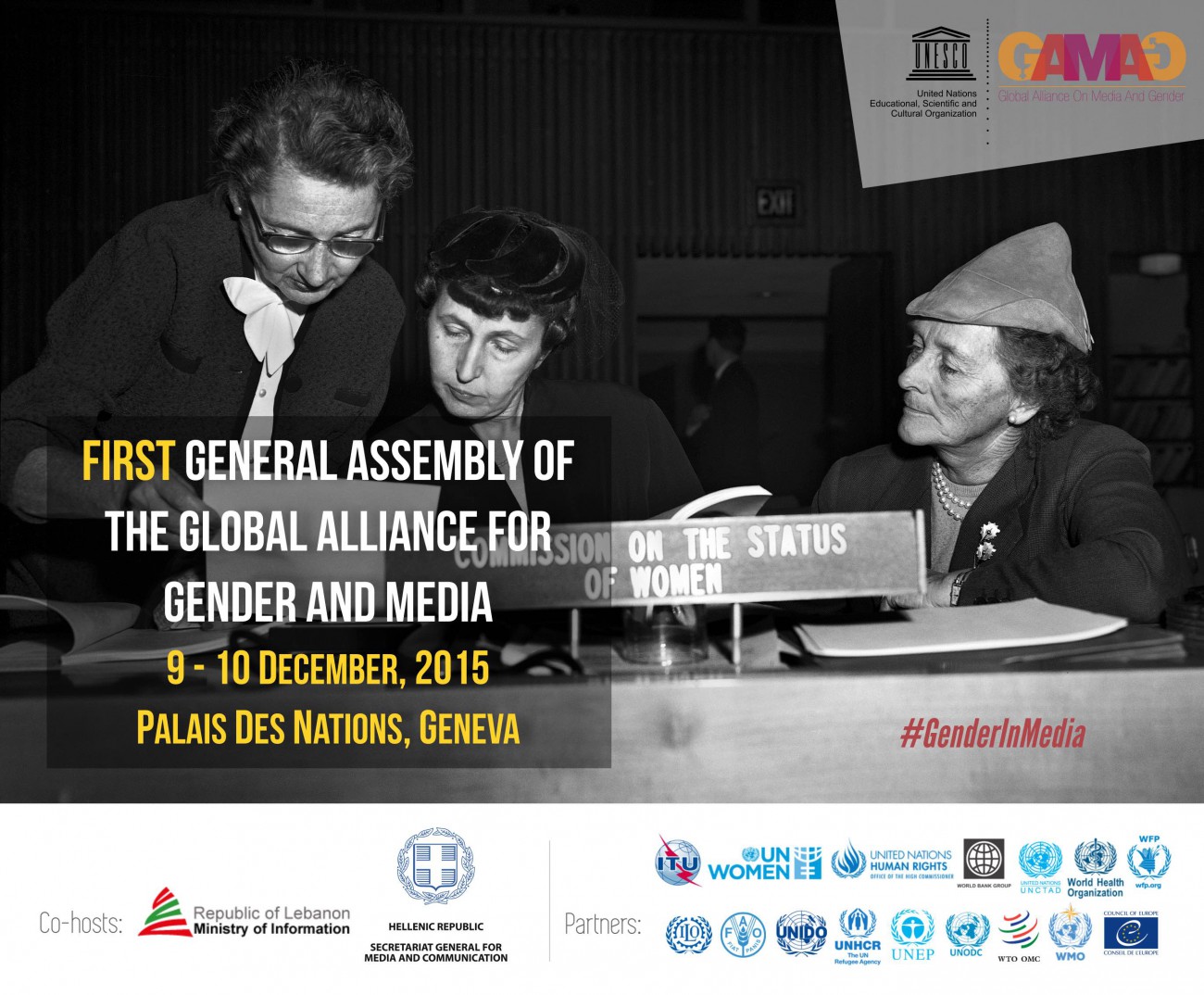 9-10 December 2015 at United Nations headquarters in Geneva, the Digital Leadership Institute joined the first-ever General Assembly of the Global Alliance on Media and Gender (GAMAG).  Read below the outcome of the gatherings, including input by Cheryl Miller, DLI Founder, on the impact of online media on the struggle for gender equality.

Geneva, December 11, 2015:  The first general assembly of the Global Alliance on Media and Gender (GAMAG) has rounded out a week of meetings at the UN with a call for gender equality in and through the media by 2030 in line with the Sustainable Development Goals (SDGs).

“On International Human Rights Day (10 December), we call for inclusive societies that give equal voice to all,” said Colleen Lowe Morna, CEO of Gender Links and GAMAG Chairperson. “This cannot be achieved as long as half the world’s population is effectively silenced.”

“We have come together to forge a global movement on gender and media,” said Alton Grizzle of UNESCO, which has facilitated GAMAG and organised the Geneva meeting with the Greek Secretariat General for Media and Communication. “Better access, leadership and portrayal of girls and women in media is a critical stepping stone for equal rights,” he added.

Launched in Bangkok two years ago, GAMAG brings together some 700 media houses, training institutions, journalism unions, gender and media activists to promote gender equality within the media and ICTs, and in the content they produce, as essential for achieving fundamental human rights for women worldwide.

Christiane Amanpour, Chief International Correspondent for CNN and UNESCO Goodwill Ambassador for Freedom of Expression, joined the International Development Cooperation Meeting on Gender and Media remotely to kick off the week’s events.  Said Amanpour: “On the very important platform that is media, women are simply not equally or even adequately represented, either in leadership roles or in media coverage.”

Over the past ten years, little has improved concerning the presence of women in media, according to Sarah Macharia who spoke on behalf of the World Association of Christian Communicators, an organisation that regularly monitors gender equality in global news media.

The 2015 Global Media Monitoring Project (GMMP) found that women constitute 24% of news sources – the same as five years ago.  “Women remain invisible or underrepresented on traditional media based on almost every indicator we measure,” Macharia warned. “And this trend has replicated itself in digital media as well.”

“As the struggle for gender equality moves to online media, the challenges multiply,” added Cheryl Miller of the Digital Leadership Institute, reporting for the GAMAG working group on media, ICTs and gender.  “Underrepresentation of women in both media and digital sectors converges online, and the scope for urgent action grows,” said Miller. From promoting positive role models online to tackling cyberviolence, “the internet is a double-edged sword for women,” she said. “It needs to be wielded for their benefit.”

At GAMAG’s inaugural General Assembly, stakeholders committed to making 2016 a year of unprecedented action on key priority areas which include digital media, youth, advocacy and gender and media research.  In addition, four regional GAMAG chapters were launched in order to operationalise the “Geneva Framework” reached at the International Development Cooperation meeting that preceded the General Assembly.

Actions announced by GAMAG working groups included a set of gender equality principles and standards to be signed up to by media houses; gender sensitivity education for the media; a best practice community on gender and media, and an initiative to identify regional and local champions for gender in media like Amanpour.

Lowe-Morna underscored the urgency of GAMAG’s mission.  “Gender equality in and through the media is intrinsic to freedom of expression, democracy, good governance and transparency. We cannot hope to achieve the SDGs if this is sidelined.” GAMAG will be lobbying for gender and media indicators in the SDGs in the run-up to the Commission on the Status of Women (CSW) meeting in New York in March 2016.

UNESCO’s Grizzle celebrated the milestones reached by the Geneva gatherings, and the support garnered from UN agencies and key public and private sector partners around the world. “With these watershed meetings behind us,” Grizzle said, “we are now looking forward to the next steps that will mobilise even greater effort and resources toward actively achieving the mission of GAMAG at a local, regional and global level.”