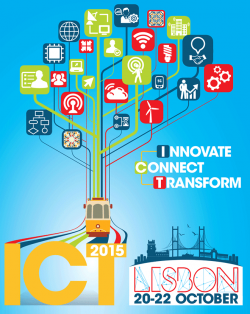 On 20-22 October 2015, more than 4500 people will converge on Lisbon to attend ICT2015, Europe’s largest ICT event. DLI board members, Ms. Cheryl Miller and Ms. Rosanna Kurrer, will host the Women in ICT booth at ICT2015, and DLI will organize “Ada200,” a special networking session to celebrate the 200th anniversary of the birth of Lady Ada Lovelace — the first computer programmer in the world, a woman and a European.  DLI and its partners will showcase European women role models in ICT and carry out a speed-mentoring activity to encourage young girls toward digital studies and careers.

The program for the Ada200 Networking Session at ICT2015 is as follows:

To participate in, partner or sponsor the Ada200 Networking Session at ICT2015, please contact us!