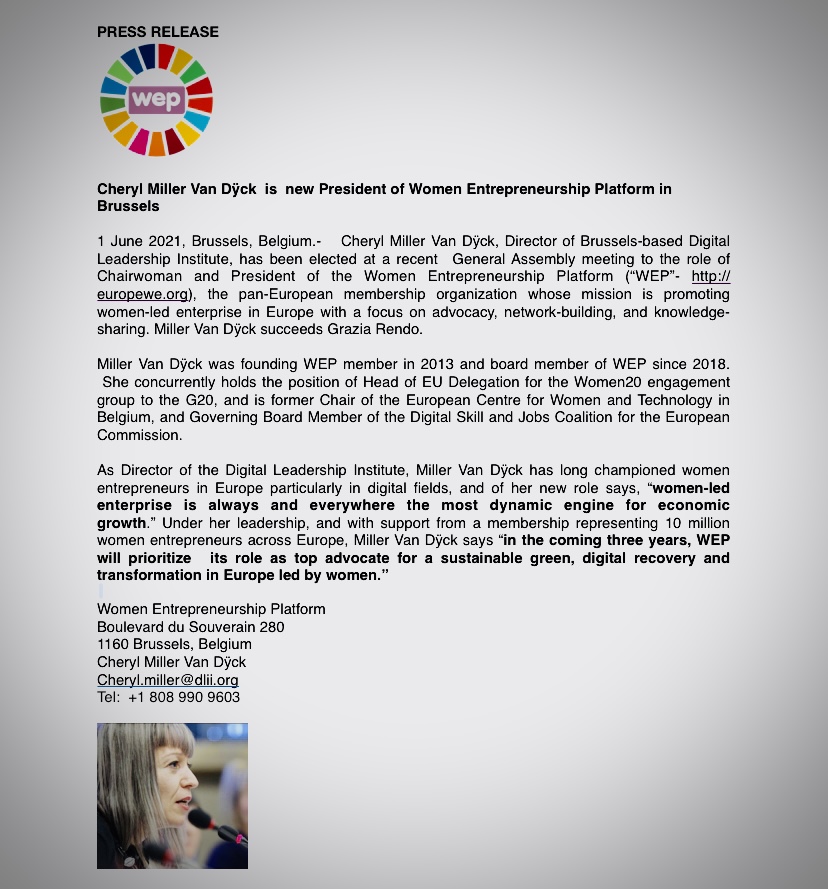 1 June 2021, Brussels, Belgium –  Cheryl Miller Van Dÿck, Director of Brussels-based Digital Leadership Institute, was recently elected at a General Assembly meeting to the role of Chairwoman and President of the Women Entrepreneurship Platform (“WEP”), the pan-European membership organization whose mission is promoting women-led enterprise in Europe with a focus on advocacy, network-building, and knowledge-sharing. Miller Van Dÿck succeeds Grazia Rendo.

Miller Van Dÿck was a founding WEP member in 2013 and board member of WEP since 2018.  She concurrently holds the position of Head of EU Delegation for the Women20 engagement group to the G20, and is former Chair of the European Centre for Women and Technology in Belgium, and Governing Board Member of the Digital Skill and Jobs Coalition for the European Commission.

As Director of the Digital Leadership Institute, Miller Van Dÿck has long championed women entrepreneurs in Europe particularly in digital fields, and of her new role says, “women-led enterprise is always and everywhere the most dynamic engine for economic growth.” Under her leadership, and with support from a membership representing 10 million women entrepreneurs across Europe, Miller Van Dÿck says “in the coming three years, WEP will prioritize its role as top advocate for a sustainable, green and digital recovery, and transformation in Europe led by women.”